When it comes to choosing which of the many different pregnancy tests on the market to use, there is no question that price matters. Are more expensive tests better than a cheap pregnancy test? You might wonder if a bigger price tag means a better chance of detecting pregnancy in the earliest stages. You might also wonder if it simply means that it is a better quality test with more accuracy. Perhaps you are wondering if it’s worth it to spend more money on an expensive pregnancy test than on a cheaper pregnancy test.

Are Cheap Pregnancy Tests Worth It?

Just because a cheap pregnancy test is inexpensive does not necessarily make it cheap. For example, the Equate brand pregnancy test from WalMart has the same sensitivity level as a more expensive brand such as EPT Pregnancy Test or Clearblue Easy Pregnancy Test. The only difference is the manufacturer. Much like your favorite food items in the grocery store come in a generic brand and a name brand, so do pregnancy tests.

How Do These Cheap Pregnancy Tests Work?

No matter the price of a pregnancy test, they all work the same way. You use the absorbent tip to detect the pregnancy hormone, hCG. Once you ovulate and your egg is fertilized, completes its journey through your fallopian tubes, and implants into your uterus wall, your body begins to produce hCG. Since this hormone is not present in women who are not pregnant, a false positive is extremely rare.

Depending on how quickly your body produces this particular hormone, you might be able to tell you are pregnant several days prior to missing your period. See, your hCG level must be 5 mIU/ml or more to be considered pregnant. However, most pregnancy tests are not designed to detect such low levels. It takes anywhere from 48 to 72 hours for your body’s level of hCG to double. This means it could take as much as a week to determine whether or not you are actually pregnant.

How Much hCG Will These Tests Detect?

The answer to this question depends entirely on the kind of pregnancy test you purchase. To find one that works as early as possible, you need to read the information available to you on the box containing the pregnancy tests. For example, if the box states that a particular inexpensive test will detect pregnancy as many as five days before your missed period, it is more sensitive than a test that does not state it can detect early pregnancy.

Most tests that allow you to detect pregnancy this early are designed to detect levels of hCG around 25 mIU/ml, which is considered pregnant. Even if you are pregnant, your level of the hormone hCG might not reach this number for several days to a few weeks after your egg implants in your uterus.

For this reason, it is imperative you understand that the accuracy ratings on cheap pregnancy tests are for women who test on the day they expect their period to arrive. However, many medical professionals believe that more accurate results occur a week after that point.

Is A Cheap Pregnancy Test Right for Me? 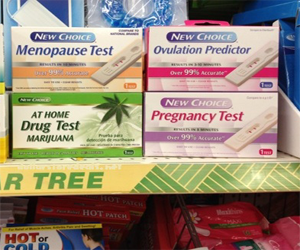 No one can answer this question but you. If you want to use a cheaper pregnancy test, that’s your decision. Many women firmly believe that cheaper tests work just as well as more expensive name brand tests. There is no reason you cannot try a cheap test to see if you are pregnant. However, if you do plan on using a less expensive brand of pregnancy test, you might want to use one with a low level of sensitivity. Chances of receiving a positive result sooner are more likely when you do this.