Evaporation Line On A Pregnancy Test 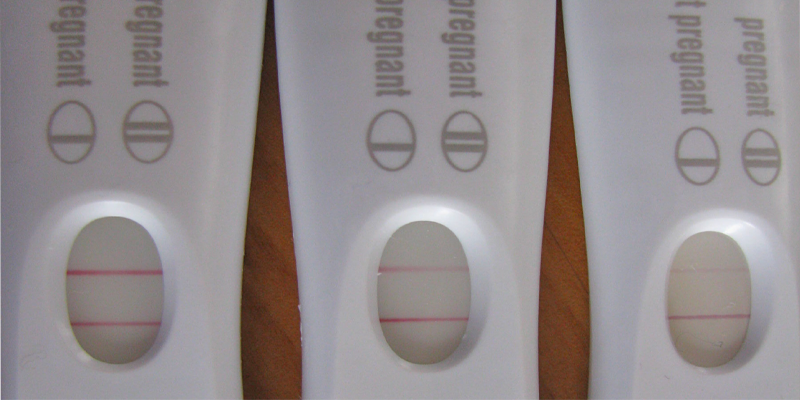 Many women think they know all there is to know about at-home pregnancy tests, but many women find that they are unfamiliar with an evaporation line on a pregnancy test. It happens frequently and the result is often devastating to women who didn’t realize this was a possibility until they see their doctor or take a secondary test.

Home pregnancy tests are fairly simple. You take them and they tell you whether or not you are expecting a baby. However, they’re really not that simple. What goes into the makeup of an at-home pregnancy test can be quite complicated. For example, tests often show false negative results. False positive results are very rare but do occur. Tests can expire, they can work incorrectly and users who don’t take the time to read the specific instructions for that particular test are more likely to misuse the test and experience incorrect results.

Additionally, pregnancy tests are not always 99 percent accurate as they state in bold lettering on the front of their packaging. In fact, pregnancy tests are only this accurate beginning on the first day of your missed period. Before that, the accuracy levels are much lower. Finally, even though an at-home pregnancy test states that it can tell you as many as five or six days before your missed period whether or not you are expecting does not work for all women; in fact, it only works for a small percentage of women.

At-home pregnancy tests work by detecting the level of hCG, or human chorionic gonadotropin, in your urine. This is the pregnancy hormone. If you take a pregnancy test immediately after you think you conceive, the test will not work. It takes as much as a full week before your fertilized egg makes its ways into your uterus and implants itself on your uterine wall. Your body does not begin to produce hCG until that egg is fertilized and implanted on the wall.

At that point, it still might not be possible to get a positive pregnancy test result. Why? Because every test is different and each one is created to read different levels of hCG. A woman is considered pregnant if her hCG levels exceed 5 mIU. However, it takes anywhere from 48 to 72 hours for hCG levels to double and most at-home pregnancy tests are not sensitive enough to detect pregnancy until your levels are around 25 mIU. This means it could take a week or two after your egg implants to tell that you are pregnant because all women’s hCG levels rise at a different rate.

What Are Evaporation Lines on Pregnancy Tests?

Now that you know how an at-home pregnancy test works, it’s time to understand how to read the test, which will provide you with a great deal of insight into an evaporation line on a pregnancy test. The first step is to carefully read the instructions. Each test works the same way, but requires a few different considerations. For example, some tests allow you to hold the test in your urine and others allow you to use a cup. Some require you hold the test for this many seconds and some require you do so for less time.

Other tests ask that you hold a test a certain way and lay a test on the counter in a certain direction. Every test tells you how many minutes you have to wait before you can read the results and exactly how long those results are accurate before chemicals and time change the results of the test.

Not following the instructions to a tee could mean that your test is invalid. Here’s what you need to know about evaporation lines; evaporation lines are lines that appear in a pregnancy test after the test has been used and sitting for a while. This is why manufacturers insist that you only look at the results during a very specific time frame.

When your urine begins to evaporate from the test strip with time, it leaves a faint line in the same location a line would appear if you are pregnant. This line is called an evaporation line. Many women look at their tests and see a negative result, save it and look again hours later. If there is a second line on the test hours later, it’s an evaporation line. It’s not a pregnancy indicator.

If you do not see a positive result inside the allotted time frame discussed in the instructions of your at-home pregnancy test, throw it away immediately. Keeping it and looking at it later might give you false hope. False hope will cause you to think you might be pregnant because a second line appeared, but this line does not mean you are pregnant.

Of course, this is not to say you aren’t pregnant. Your hCG levels simply might not be high enough to determine whether or not you’re pregnant just yet. However, if you want to avoid the questions and the worry that come with an evaporation line on a pregnancy test, read the instructions and discard your test immediately after checking the results